When it comes to physical training, I'm a true minimalist. I'm not really interested in excessive workouts done for pure entertainment or fun.

I know, I may sound like a grumpy old man, but I really do believe that training (notice how I said “training” and not “working out”… there is a difference) should give you a means to an end and be done with a purpose in mind.

If you want to be entertained, watch Netflix.

If you want to get in better shape, do what needs to be done… but nothing more.

With that out of the way, I don't think that there is a single more effective exercise than a Hardstyle Kettlebell Swing.

A properly executed kettlebell swing will allow you to develop Power, Strength and Conditioning… it's a one-stop-shop for athletic performance, strength and fat loss.

In this article we are going to delve deeper into the kettlebell swing.

Before going further, you should have a baseline knowledge of HOW to perform a kettlebell swing.

If you don't know how to execute a proper swing, I suggest you check out my FREE Kettlebell MasterClass  or pick up my course Visual Impact Kettlebells and get deep into the video tutorials where I explain the basics of the swing. 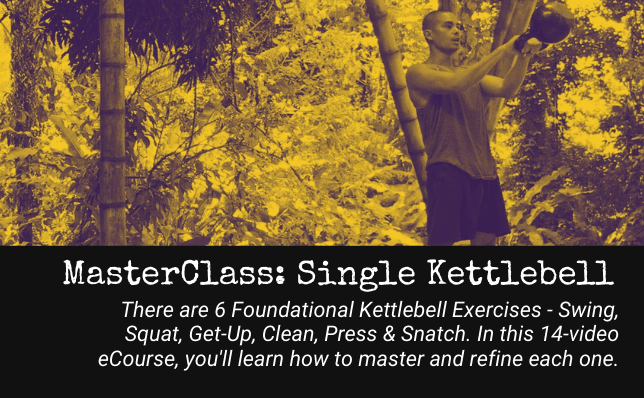 If you've got a solid foundation for the swing – and you have some experience with snatches & cleans – then these next tips will really help you dial things in.

Get Into a DEEP HINGE to Get More Glute Activation

One of the major benefits of doing kettlebell ballistics (swings, snatches & cleans) is the development of your glutes.

“KettleBUTT” is what the kids call it these days.

But sometimes people get the exact opposite effect…

…where the glutes stay flat, but the hips start to expand.

I'm not going to post a picture of what I'm talking about, but you know the look… 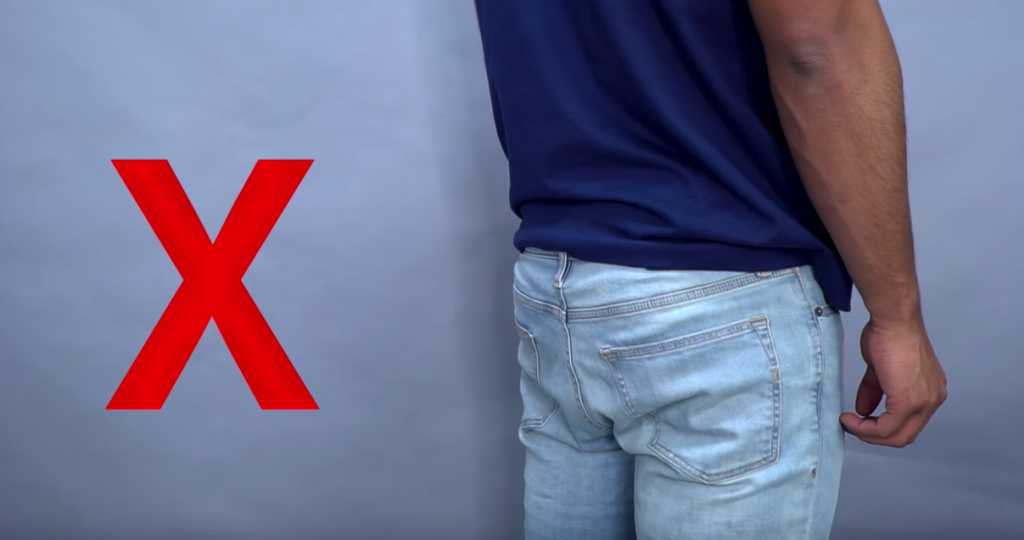 The major reason for this is a lack of “glute activation”… a fancy term for saying that your butt muscles aren’t getting stimulated enough for them to work.

Your gluteus maximus muscle – your booty – should be the PRIME MOVER muscle when you swing a kettlebell.

And having “good glutes” aren't just about aesthetics.

Your glutes are the strongest muscles in your body AND provide essential support for BOTH your lower back and your knees… 2 of the most vulnerable and most complained about parts of the body for men.

You can fix this by doing some targeted glute firing exercises as part of your warm-up before you start your swings. Exercises like clamshells, glute bridges, 1-leg deadlifts, etc.

This is a big deal.

You see, if you make the mistake of “chasing reps”, sometimes you forget about your technique and just want to get through your prescribed repetitions.

“The program says do 20 swings, so I have to do 20 swings!  It's doesn't matter if half of those reps are crappy, right?”

I explain what that is in this video.

With a deeper hinge you'll be able to access and stretch the glute max fibres and therefore “feel” the glutes more.

Once you can do that, you'll start to notice your butt starting to take shape and you'll end up generating more power through your swing as well.

Swing Critique of a “Shallow Hinge”

If you're a customer of my course Visual Impact Kettlebells, then you may have seen this video in the private Facebook Group.

In this video, Kiran posted a video for me to critique his swing. By making a few tweaks and showing him how to DEEP HINGE, we were able to clean a few things up and stave off any potential back pain that he may have experienced by swinging too shallow.

I suggest you check it out…

The key to speed and power – or the reason why athletes are fast and can jump high – is because of their ability to put force into the ground.

Force Down = Force UP

Now you may not be training to run fast or jump high, BUT…

… to be more powerful means that you’re accessing your fast twitch muscle fibres.

If you remember from my previous writings, fast twitch muscle…

So when you do your kettlebell ballistics – swings, snatches & cleans – the idea is to exert as much force as you can into the ground.

It’s not so much about what the kettlebell does, but what your body is doing.

… today I’m asking you to focus on exerting as much force into the ground.

When you “throw a tantrum” with your kettlebell swing or snatch or clean, you are doing what we call in the kettlebell world a “STATIC STOMP”.

If you watch videos of anyone doing a good kettlebell swing, you should notice that there’s almost a “violent” vibration in their body as they lockout their hips & knees.

And in order to do that, you need to “throw a tantrum” every time you finish a rep of a Swing, Snatch or Clean.

So in today’s video, I’ll show you how to “throw a tantrum” and apply the static stomp to your ballistic training.

We've all been taught that you should exhale on the “effort phase” of an exercise… which is somewhat correct, but incomplete.

When you perform a lower body exercise, you exhale as you fully extend your hips and get into the “standing plank”.

You do this with a squat, a swing, a snatch, a clean… it's basic.

BUT (and this is where you complete the technique), you MUST maintain your ab brace.

This is what we call “Breathing Behind the Shield”:

As you lockout your hips by squeezing your butt and bracing your abs, you almost let out a hiss or a grunt.

If you've ever seen a boxer hit the pads or a heavy bag you'll know the “hiss”.

OR if you've ever seen a martial artist finish a punch, you'll know the “kia” sound.

You make the sound to create tension in the body and to direct your energy into the finish.

It makes the exercise more powerful – more so than a simple exhale.

In fact, doing a FULL exhale is the LAST thing you should do because it makes your lower back more vulnerable to injury.

It's called the “Tootsie Roll” effect, and I'll explain it in today's video…

The most important thing to remember about the snatch is there are TWO lockouts.

Although the snatch may seem like one fluid exercise, there are in fact two separate segments to the snatch…

It's because of these 2 lockouts that you need a “double breath” when you snatch.

Standard operating procedure for any exercise is to “kia, grunt or hiss” on your hip extension. This is the usual breath/exhale for the swing that allows you to create further tension in your cylinder to keep your back safe.

“Breathing behind the shield” as we call it and I showed you above.

Remember the key to breathing behind the shield is to be able separate your breathing from your ab brace… maintain tension in your abs while still being able to breathe (don't hold your breath!)

But because the “stroke” of the snatch is almost 2x that of a swing (ie the kettlebell travels almost double the distance), you require another short and less intense “hiss” as the shoulder and elbow lockout.

So to breathe for the snatch, you hiss/grunt/kia on the hip extension;

Then you let out a small hiss at the top as you “punch” your arm vertical.